The Sorell to Bellerive Railway operated between May 1892-June 1926 but before it started there were a lot of arguments about building it. People thought it was unnecessary and too expensive they also thought the ground was either too soft, too stony or too hilly and bridges needed to be built. 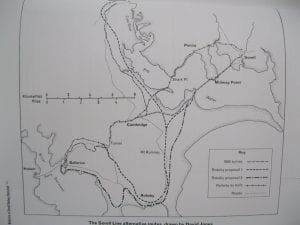 The Public Works Department was responsible for building of the railways. When built they were handed over to the Tasmanian Government Railways.
When constructing the line six major tasks were involved:

When Tasmanian Government Railways compared construction costs of different lines Sorell came in as one of the most expensive.
Documents listing 261 items were ready in July and in the late 1889 the tenders were called for the construction of the line. R.C. Patterson was the tender chosen out of the ten.
Rails were ordered from England; they were produced in Middlesbrough and stamped “ 1888 STEEL T.G.R-SL” (Tasmanian Government Railways- Sorell Line) These rails and fastenings were already there waiting for the contractor.
By 1889 expenditure had been:

In February 1891 an extra 70 tons of rails were brought from the Zeehan stock. In the same month the inspector requested a tricycle presumably to travel the track.
In February 1892 Seabrooks listed their work force in the preceding three weeks:

In February, March and April Inspector TF Rigby complained of poor materials and poor workmanship. Mr Seabrook’s reply in his defence he pointed out that the materials had been inspected and approved by the authorities.
On the 23rd of April 1890 Lady Hamilton the Governor’s wife turned the first sod (the first shovel of dirt to start construction) at Sorell.
A locomotive was moved from the Hobart Railway Station to Bellerive on Wednesday for the Sorell Line. The engine weighed about 12 tons and was placed minus the wheels on a substantial wagon prepared for the occasion and drawn by nine horses to the PS Kangaroo Wharf.

THE FIRST TRIP
The railway was opened on Monday May 2, 1892. There were two trains running every day leaving Bellerive at 10am and 5.30pm and left Sorell at 7.50am and 3.20pm. All trains stopped at Cambridge and the journey was timed to take one hour.
Very few people took advantage of the first trip. On the 10am trip that left from Bellerive Mr Back, Mr McCormick and Mr Lamb made an inspection of the line and were very satisfied with the result. All the track needed now was the traffic to keep it going.
There was a banquet for 35 people put on at the at the Pembroke Hotel after many photographs had been taken.

When the railway was first built there was no tunnel in the hill now called tunnel hill after Cambridge so the train had to travel up the hill and it was very slow on the way up and the children used to jump off the train and race it up to the top. 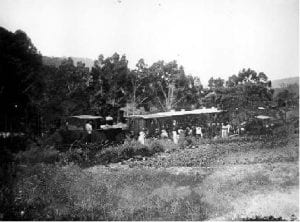 BELLERIVE TO SORELL
The train left Bellerive at 10am and made its way to Cambridge. After crossing the north western part of Pittwater the train would stop at Shark Point as this was a very popular picnic spot. On some trips many people would get off the train to spend the day’s picnicking and fishing before catching the train back to Bellerive. At Shark Point two major constructions had to be done to allow the railway to proceed to Sorell.

A stone causeway was built to link Cambridge end with the Sorell end.
Then a timber viaduct with 20 metre pilings was built to connect the causeway to Shark Point.

Deep cuttings were necessary at Shark Point in “extremely tough rock”.  A cottage was erected at Shark Point in 1893. From Shark Point the railway travelled across two of the major properties of the district. These were: Flexmore and Frogmore. In 1896 a short siding was built at Frogmore and by 1920 this was known as Penna, and a goods shed was built here. At Coopers Crossing, a small shelter shed and platform were provided in 1920-1921.

At Shark Point the train was signalled across the bridge as people used to fish from it.
Red flag-Stop
Green flag-slacken
White flag- clear.

CAMBRIDGE
After another crossing over the Cambridge road near an inn called the Three Trunks Inn, an impressive and still standing two metre high stone faced tunnel was built. Another level crossing was then built east of the train station then, they then wound up with two level crossings down to Cambridge on the south side of the Barilla Rivulet.

At Cambridge they had three tracks. A railway cottage, cart dock and a small stable was later built. At the Cambridge office there was a ticket booth with a waiting room and fireplace. The post office, ladies toilets and male toilets where located out the back.

SORELL
When arriving at Sorell, travellers alighted at the station which is now a private home and used as an antiques store. They found Sorell was a substantial town with a council, two hotels, three churches and five stores. There was plenty to do before catching the train back.The train used to carry grain,chaff,wood, wool and cream from Hanslow’s. This was loaded at Johnson’s crossing which was half way between Bellerive and Sorell, just out of Cambridge. The cream was reputed to be the best in the district.

The people used to drive their produce to the train for carting to Bellerive.  Most of the wool, chaff, wood, etc came to Cambridge from Acton.

Researched by Scott R using book about the railway published by the Bellerive Historical Society in 2005.