The Midway Point Fire Brigade was opened in 1970 by a man named John Lions.

The Midway Point fire brigade was re-opened on the 1st of April 1994.
The Midway Point Fire Brigade runs a junior fire fighting program for kids aged 10 and above.
They built the fire station there because they needed one after the 1967 fires that occurred in the area.

They have had around about nine chiefs in the past.
The first chief was Mr Jack Quarrel.
The present chief’s name is Mr Andrew Dare (2007).
In 2007, there were 28 members and 9 of them were ladies.

The way that they know that there is a fire is that they have a little thing called a pager. It tells them where the fire is.
They have to wear yellow or orange overalls so in a big bush fire they can be seen better.

To find out more about the current Midway Point Volunteer Fire Brigade, check out their Facebook page here.

Ben Lynch brings the fire on his property under control. 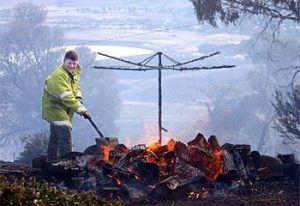 Dodges Ferry fire station opened on April 1993. It was opened by Dr Frank Madill. He was the Minister for Police and Emergency Services.

The first chief was David Wells. The chief in 2008 was Chris Wilson, 2 Grant Hawkes, 3 Adam Hall, 4 Chris Suckling. The leading fire fighters were Micheal Olive, Olive Torenius and Carmen Zeralla. In total, there were 37 people in the fire brigade in 2008.

There are 3 fire trucks in the station. The volunteers use these to do local burns and train for what they do.

The hottest fire was at Scenic Drive, Lewisham.