Thanks to Jo Hopkins for writing this post for the A-Z challenge.

UMBRELLA MAKER is not a trade that springs readily to mind, however that is the occupation that James Jones gave when he was committed to trial in London in 1837.

James Jones was born in 1817 in Shoreditch London. On 27 June 1837, James approached John Love in the street and demanded money, making him a ROBBER.1

He was sentenced to transportation for twenty-one years and began his time as a CONVICT. He was transported on the Moffatt and arrived in Hobart on 1 April 1838. His convict record  has umbrella maker crossed out and the comment LABOURER inserted.2

James Jones was allocated to the New Norfolk area to labour in a WORK GANG, then after his probationary period he was assigned to Robert Thorne of Pitt Water. Thorne was the son of Samuel Thorne, a marine who arrived in Hobart Town in 1804.

As an ASSIGNEE Jones was required to undertake any tasks allotted by his master, and Thorne had varied business interests – coastal shipping, farms, a ferry, the Rose and Crown Inn. Thorne had a grain store on the foreshore in Lewisham and probably operated a passenger ferry from there across to 5 Mile Beach (The middle of the three ferries). James Jones is likely to have been a FERRYMAN who rowed across the channel.

James Jones received a Ticket of Leave on 25 December 1842 and married Ann Kennedy in 1843. On the birth registrations of their three children (William 1844, Harriet 1845 and James 1848), he was described as a MARINER. In 1847 he attained a Conditional Pardon.

By 1848, James Jones had acquired and was the LICENCEE of the Victoria Inn in Lewisham. (The building was extensively remodelled for a century then demolished around 1968. The Lewisham Tavern was built on the site.) 3

Ann Jones died in 1857, and James remarried to Charlotte Stacey, daughter of John Stacey and Hannah Stacey (Green).  The 1858 marriage record lists him as a LICENCED VICTUALLER. Their son Charles and their eight daughters were born in Lewisham between 1859 and 1875.

For many years James was a great SUPPORTER of the local area. Newspaper reports (found through Trove) see him on organising committees for race meetings held at Forcett and for regattas at Lewisham. The Victoria Inn was often the venue for meetings and celebrations.

In 1865 James Jones, SHIP OWNER, together with Robert Harrod launch the Lewisham Belle, a 55-foot schooner to trade between Sorell, Lewisham, the Tasman Peninsula and Hobart. Unfortunately, the new and uninsured boat sinks off Taroona
with the loss of three crew and the cargo of wheat.

James Jones continued to live in the Lewisham area where he had been assigned in 1839. By the time of his death, he was a LANDHOLDER owning 169 acres of land around the area. Much of the property was farmland – around Boathouse Hill and the hill behind and including the Rose and Crown Inn (no longer licenced). His estate included the Victoria Inn and the parcel of land immediately to the north of the inn. This block, perhaps mistakenly sold by the government, contained the local Watch House, making James a GAOL OWNER. 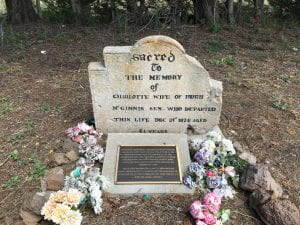