Thanks to Helen Brinsmead for writing this post for the A-Z challenge.

Before the causeway was built, settlers and visitors to the Sorell District had to travel overland via Bridgewater, Grass Tree Hill and Richmond, a full day’s ride. A quicker way was to catch a boat from Kangaroo Point (now Bellerive), or across the Pittwater from Sorell. A long carriage ride or journey on horseback, or a boat trip in a skiff were the options until a public meeting was called in March 1849 with the residents of Sorell for consideration of the building of a causeway across the Pittwater. The concept was agreed with, with most of the discussion concerning whether extra taxes would be levied to pay for it. We know now that the Sorell Causeway wasn’t opened until 1872, leaving the ferrymen many more years to earn a living.

1827 John Stacey is listed as a Ferryman in Sorell when Rev Garrard registered his son John’s birth.

Mr J Davidson, an established waterman with a route from Clarence Inn to Kangaroo Point, proudly advertised in June 1831 that he had obtained a new 30 foot boat expressly to be “one of the safest ferry boats on the Derwent” in any weather.

I wonder if Samuel Pearson, my 4x Great Grandfather, was an employee of Mr Davidson, as he is listed as a Ferryman of Sorell in the Christening register of his daughter Jemima in April 1831.

It looks as thought there was a need for two ferry journey, to the Lower Pittwater, and then, from Midway Point to Sorell with the traveller moved by cart, as in 1835, a theft was reported by Mr David Price. He’d left his bag in one boat “as he was crossing to another” as he was travelling to Kangaroo Point. His bag was found in the possession of another traveller, who said he’d been so intoxicated he’d not noticed which bag he’d picked up. 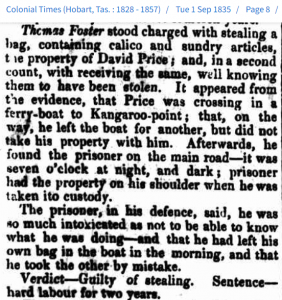 William Billett (Bellette) is noted as a Ferryman of Sorell by Chaplain James Norman on the Christening of his son John in 1837. I note that the same page of the Register has others listed as Boat Builder and Mariner. Clearly, Ferryman is acknowledged as an occupation in it’s own maritime field. I note that Samuel Pearson is one such Mariner listed, with his daughters Diane and Maria (my 3xGGmother) and son Richard being christened that year. Does this mean that he has become skilled enough or been employed on whaling ships or routes that take one out of the Derwent?

Unruly or drunk passengers were also a danger in crossing, along with the weather. In July 1838, a drunken passenger refused to let go of the sail when a squall rose. The boat with four passengers and cargo capsized. All were rescued by nearby boats. Unfortunately the waterman is not named. I wonder if it were William or John?

In 1840, Ferry proprietors and masters are named as Mr Spode and Mr Gunn in an article noting the there were a shortage of ‘proper hands in the boats’, leading most travellers to continue overland to cross at Risdon. There was a call to change the law regarding to which activities convict servants could be assigned, as it was currently illegal to use assigned servants in the operation of the ferries at Kangaroo Point, whereas Mr Dobson at Risdon, could.

Being ferried across the Derwent could not be assumed to be without risk. In November 1864, a Waterman named Carter was ferrying Mr Nicholls, when a squall capsized the boat: both were rescued.

The O’May family of Bellerive introduced the first steam ferry, the Surprise in 1871, after eight years running a sail boat ferry service.

By 1888, the ferryboat was more likely to be a steamer than a sail boat. The O’May family were now running the Taranna, the Minx and the Pearl, while the Kangaroo had a route from Bellerive to the city. All steamers were busy on the day of the eighth annual Regatta at Bellerive on Sunday 15 April.