Thanks to Greg Williams for writing this post for the A-Z challenge.

My 3X great Grandfather Benjamin ZELLEY lived at Sorell and was a Farmer & Storekeeper.

The name is unusual and originates from English 7th Century ‘Saelig’ meaning happiness & good fortune. There are many derivatives of the surname including Seely and Seli.

Ben was born in 1813 & baptised on 25th July 1813 at Shropshire England. He was transported to Van Diemen’s Land on the ship Argyle. For the crime of stealing & vagrancy, he was given life. He arrived as a convict with surname SULLY on 4th August 1831.

On 3 April 1838, Benjamin married Elizabeth King who was also a convict from the ship Westmoreland. Ben’s surname was Selley for this marriage. As they were both still convicts, they had to get permission to marry.

Benjamin’s brother Robert also came out as a convict on the ship David Clarke in 1841.

By August 1851, Ben was a respected landowner and was on a committee to use money raised under the Dog Act to erect a bridge or causeway across Salt Water Creek which is on the main road from Sorell to Richmond.

After 13 years of marriage Elizabeth died on 15 November 1851 at age 42 from consumption.

Ben married Eliza BYRON (1835-1881) on 1852 at St David’s, Hobart. His occupation was landholder and he said he was 30 years old while she was 18. Her father was John Byron who was a Superintendent of Police and buried at St Johns Church, Richmond.

In October 1854,  Ben was appointed to be a member of a provisional committee for the newly formed Sorell Steam Navigation Company.

Ben senior passed away on 16 Jan 1859 & was buried at St George’s Church, Sorell.  After his death, his property was sold. He also had shares in the Steam Navigation Company and corporate debentures due in the future.

An obituary in the newspaper has his name spelt as ZELLY. He died at age 44 after a sudden illness. The notices mention he was an old and respected colonist. But the death record says he was fifty years old, a store keeper and died of natural causes.

As there were three young children to raise, Ben’s widow Eliza re-married in 1861 to John Talbot Coram.

My Great great grandfather Benjamin Zelley junior married Matilda Eleanor Hardy in New Norfolk in September 1879. Upon turning 21 in 1879, he took over the shop his father had operated in Sorell. 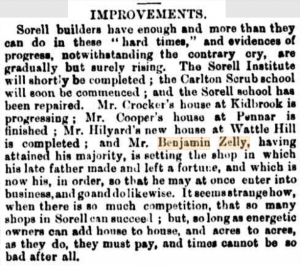 Readers: Do you know where his store was in Sorell? At the birth of his daughter in 1880, it mentions Fitzroy Store.

Boats were an important aspect of life around Pittwater from the 1800’s. The alternatives were an extra 20 miles around the north of the water body by land or 40 miles by sea.

Sailing and rowing regattas on Pittwater were frequent in the early days of settlement and planked Snipe Class yachts continued to race in the Lewisham area, up until the late 1950’s. Speed boat racing was also common in the Lewisham area, at least into the early 70’s. While power boat activity continued near Lewisham, the power boat and water skiing activity at Midway Point had ceased, so a road access and all-weather launching ramp was built in the 1968/69 sailing season.

Sailing craft at Midway Point in the late 1960’s included several Mirror dinghies, a Sabot, a TS 16, a clinker planked dinghy, a Moth class, a Lightweight Sharpie, a trimaran, a Cadet Dinghy and even a sand yacht on Five Mile Beach. There were also a couple of cruising yachts and
inboard motor boats.

Mac Story organised a sailing race around the two islands to the South of the causeway – this saved laying marker buoys and made for a light hearted adventure for newcomers to sailing races. After the Island Race, Story convened informal meetings and ran three more races above the causeway. Enthusiastic family members were starters and time-keepers and Mr Cyril Bond provided his motor boat and seamanship as a safety service. The Club’s home base at the end of Brady Street was established on land owned by Mr WJ Reynolds.

During the winter of 1968, informal meetings and fundraising activities ramped up. Brian and Jacqui Dawson donated a new dinghy as a raffle prize for a boat show at the local hall. At a time when many wage earners were only paid $40 per week, $156 was raised from various sources. Mrs Pat Webberly, Mrs Pat Whitehead, Mrs Marchant, Mrs Ros’ Buckland and Mrs Freda Ziegler went on to become expert fundraisers for the Club, with money raised from raffles and Christmas tree sales going toward Club facilities and ongoing roadworks.

The Public Meeting to officially launch the Club was held on Tuesday 6th June 1968 and was attended by 21 people who elected the inaugural committee: Mr M Story, Mr J Whitehead, Mr T Miller, Mr B Marchant, Mr T Buckland, and Mr J Miller. A constitution was developed, Midway Point Yacht Club was granted membership of the Tasmanian Yachting Association and consequently the Australian Yachting Association, with membership enabling local sailors to compete in events at other clubs and at regattas, plus sailing championships anywhere in Australia.

From the 1968 beginnings, the Midway Point Yacht Club became known as a friendly club where women of any age were encouraged to crew or skipper a sailing boat. Debbie Green was a very early crew along with Pam Webberly and Pat Whitehead. During the 1969/70 Tasmanian Mirror Dinghy Championships, MPYCs first all-female crew of Pat Whitehead and Elsa Story scored a creditable 5 th placing in a field of 20 male crews. Over the following years many female sailors have amplified the early example.

Membership rose to over 100 enthusiastic members in the first two years. Along with many clubs the MPYC membership dropped after a few years and then rose again. Today it is a strong and active club with a solid membership base and training programs. The club house and the modern jetty, along with launching and rigging areas are now suitable for all manner of sailing events, including state championships. MPYC was awarded the Tasmanian Yacht Club of the Year in 2017. In 2020 MPYC became a direct member of Australia Sailing.