After publishing the post about soldiers from Sorell in WWI, I had a comment from Martin Lovell about his great uncles Morris Joseph and Paul Joseph. Apparently three brothers went to war and only one, his grandfather Erle Joseph, returned. Martin added some photos and more information on the Facebook post and has given me permission to use them to write a post on this blog.

On 14 July 1880 William Morris JOSEPH aged 26 married Emma Amelia McGUINNESS(sp) aged 22. The witnesses to the marriage were Garrett C Joseph and Alfred McGuinness. They were married at the Carlton Congregational Church which first opened in 1841. 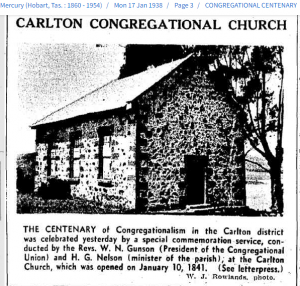 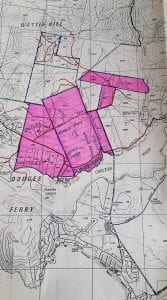 Between 1881 and 1896 the couple had 6 children – 5 boys and 1 girl; all births registered at Sorell. In most cases their father, a farmer at Carlton, was the informant.

The property named Morrisdale which fronted onto Carlton River is shown on the map. I am unsure if the family lived on the property but according to the silver wedding anniversary notice for William and Emma’s marriage, William was living at Prospect Farm in Carlton, his father James had been living at Bushy Park, Carlton and his father in law had been living at Bay View House in Carlton. 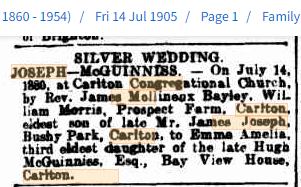 By 1908, we know the property is now known as Morrisdale as Paul Joseph, who was studying to be a minister, took over the vacant pulpit for an evening service at the Congregational Church. 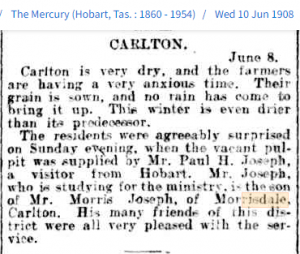 Paul was often mentioned in the local papers between 1908 and 1918.   In 1910, he was appointed assistant pastor of the Port Adelaide Congregational Church for a twelve month period. He then became one of the first students to enter the newly established Congregational Training College in Adelaide where he was stationed at Semaphore and had charge of the Mission Church there. But in 1916, Paul bought the property Montefiore in Adelaide. He was planning to build a temple on North Terrace from a fortune supposedly being left to him. But alas this did not happen. Read this newspaper article about the full story. 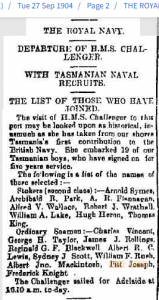 Looking at another of the brothers who went to war, we focus on Morris Pitt Gladstone Joseph known as Pitt. He seemed to enjoy the water as in 1904 he enlisted with the navy when the HMS Challenger arrived in Hobart. We know this is the correct Pitt Joseph as it is later mentioned in his service records that he had been in the navy.

Pitt must have left before his five year term was up as in 1908 he was being challenged to a boxing match by I.T.A. Stacey from Nubeena. The match was to take place in Hobart and the best of 15 rounds. Winner to take ten pounds.

Paul and Pitt both died in World War I.

By the time Paul joined in August 1916, he was married with one child. His wife Dorothy Leigh Joseph lived in Welland in South Australia but at some time during the war, she moved to Morrisdale property at Carlton. Paul spent time training in Australia before embarking on the Seang Bee  on 10 February 1917. Paul served time in the field in France as originally part of the 9th Reinforcements of the 48th Battalion. He was declared missing in action on 5 May 1918 but on 20 July 1918 was formally reported as killed in action. In 1922, Dorothy was sent a notice that her husband’s body had been interred at the Adelaide British Cemetery at Villers Bretonneux in France. Dorothy received the memorial plaque and scroll as well as Paul’s Victory Medal and British War Medal. 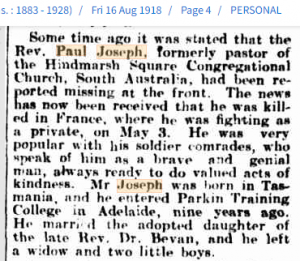 Pitt joined in April 1916 and was part of the 18th Reinforcements of the 12th Battalion. He mentions his trade as a miner and that he had been in the navy previously. He was first sent to Egypt and spent time in the 4th Auxiliary Hospital with measles. On release sent to the Australian training camp at Tel El Kebir. By late 1916 they headed to England and then in the field in France.  Pitt was killed in action on 6 October 1917 in Belgium, probably at the Battle of Broodseinde. In his will, he made his brother Claude the executor and bequeathed all his property and moneys to his sister Emma Pearl Joseph. Pitt’s father, William, received the Memorial Plaque and Scroll as well as the Victory Medal.

The third brother who went to war was Erle but luckily, he survived and returned home. He was also with the 12th Battalion but joined in January 1915. Whilst at Gallipoli he received a gun shot wound to his right leg, leading to a stay in hospital. In April 1916, he had bronchitis, another stay in hospital. In August 1916 while in action in France he received a gun shot would to the thigh. Then finally in May 1918 he was again wounded to his left knee and right thigh. He was sent back to England for treatment on his gun shot wound to his left leg including a fractured femur. In late November 1918, Erle returned to Australia on the Suevic, the only one of three sons to do so. Erle was awarded the Victory Medal, the 1914-1918 Star and the British War Medal. In 1966, when living in Lindisfarne, Erle also applied for the Gallipoli Medal. I am unsure if he received this or not.

In 1919, Erle applied for land as part of the returned soldiers settlement and was granted 823 acres at Wykeholme, Carlton. 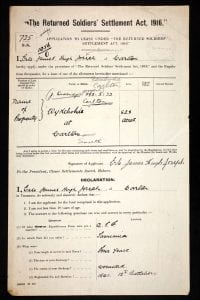 In 1921, William Morris Joseph wrote to the appropriate department about the issuing of a war gratuity. In his letter he explained his daughter was bequeathed everything under Pitt’s will but he and his wife have been looking after their grandchildren on their property for four years as well as a wife of another son who died in the war (Paul) for two years. They didn’t charge her board or food, and Paul’s wife used her money to clothe her children. Eventually William received just over 86 pound as a war gratuity.

Erle and his two older brothers, Frank and Claude,  were often mentioned in advertising in the newspapers especially warning people about hunting on their properties.

In January 1945, Emma Amelia Joseph died at her son-in-laws residence at Middleton, aged 86. Two months later Erle’s uncle James, who lived at Rosetta, died in a boating accident at Carlton River sandbar. A year later in 1946, Erle’s father also died at Middleton aged 92. In 1954 Erle lost another member of his family, his brother Frank, by accident on the farm. 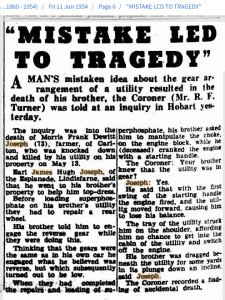 Erle Joseph married Hazel Cadger and had six children. One daughter being Martin Lovell’s mother June Joseph who married Harold Lovell. Harold worked the farm with Erle for a number of years. Information from Martin: 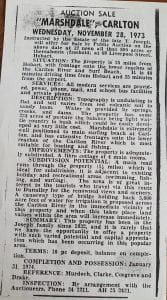 The family were very well known in Carlton and had streets named after them : Josephs Road and Erle Street.

In 1973, the property Marshdale was sold at auction.

In 1990 at age 99, Erle went back to Gallipoli with a group of veterans, war widows and junior legatees as guests of the Australian Government. Erle is in the front row, second from the right. 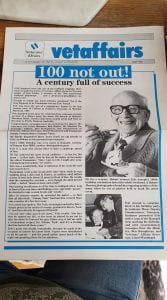 Erle celebrated his 100th birthday in style with messages from the Queen and Bob Hawke the Prime Minister at the time sent Barry Jones down to visit with Erle. Both Bob and Barry were personal friends of Erle.

Many thanks to Martin Lovell, grandson of Erle for many of the images and information for this post. Newspaper cuttings were snipped from Trove digitized newspapers and  the resettlement paper was from Libraries Tasmania. Information about war happenings were found in the service records for each man, found at the National Archives of Australia.

Readers: Did you know any of the Joseph family? What memories do you have of them?