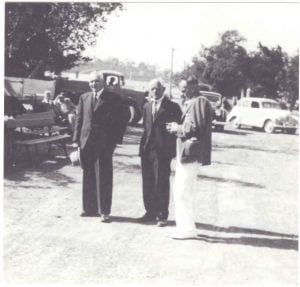 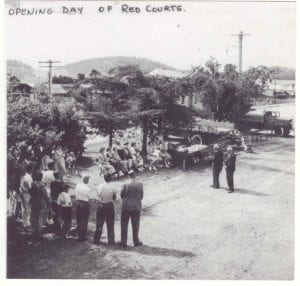 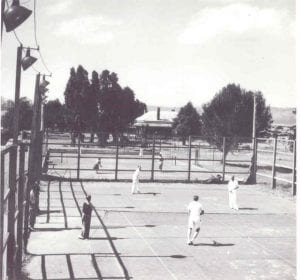 These people are playing at Opening Day at Red courts at the Sorell Tennis Club.

In 1913 there was a public meeting held at Sorell Hall to form Sorell Tennis Club (Sorell Hall is now an antique store). A few years later in 1918 Sorell Tennis Club was opened by Col. Blacklow it is located at Pelham Street Sorell. There were two teams in the Sorell district; they were Sorell and Pembroke. The first President was Dr. Webster. The first Secretary was Mrs. Featherstone. The first Treasurer was Mrs. Peacock.

The clubroooms have gradually improved over the years from a small shed to a larger clubroom to the current two story building which over looks all the courts. There was one court and it was asphalt then later on it was covered with concrete. The second and third court was covered with red crushed gravel from St. Marys mines and brought in by rail and truck. These courts were later reconstructed in “no fines” concrete which allowed water to drain easily and very quickly (Opened in 1980). Two courts were added and laid in “super grass” acrylic fiber. Courts 1 and 2 were later reconstructed with super grass.

Teams from the Sorell Tennis Club play in a A.Y.C night competition against other teams from different clubs. Midweek ladies matches started in 1972. Children tennis lessons are at 3:45, 4:30 and 5:15 on Tuesday, Wednesday and Thursday.